Università degli Studi della Campania Luigi Vanvitelli (UniVan), is a dynamic institution in education and research, as it promotes (a) information and training, (b) support, self-assessment and advice, (c) research, through the establishment of management in strategic areas, a Research Commission and the Service Centre for National and International Research (CSAR).

The Department of Law is involved in numerous national and international research activities, including the doctoral program in “Internationalization of legal systems and fundamental rights”, and has developed expertise through many national projects on the protection EU fundamental rights. The specialization, in particular, on the subject of the Charter of Fundamental Rights derives from highly specialized interdisciplinary research, tending to the integration of legal, historical-philosophical, social and economic knowledge.

CSBG boasts many successful mediations and hundreds of people trained through many training courses. The team is interdisciplinary and includes five mediators, expert lay judges and consultants, as well as a wide range network of trainers and experts.

CSBG will lead WP3 and sill support UNIVAN in carrying out WP2 activities. It will handle:

The association has its official headquarters in France, but it operates 5 other Member States, being composed by 5 national associations:

UEMC participated in designing of BEST PRACTICE of Commercial Courts in Europe, in knowledge exchange between Member States associations and in Congresses at the Council of Europe in Strasbourg.

It is the first association of Lay Judges born in Italy. Its representatives have been elected in more than half of the Courts of Appeal Judicial Councils and it has several members.

Over the years, the ANGDP has brought forward requests from Lay Judges to Italian institutions in order to improve working conditions and for the recognition of Lay Judges status, provided for by art. 116 of the Italian Constitution. The results obtained include (but is not limited to): the increase in mandates with continuation of functions, compared to previous legislation; the establishment of the autonomous section of the Lay Judges in the Judicial Councils at the Courts of Appeal, with consequent representativeness of the category; the reaching of the entire competence on immigration.

The action of the ANGDP aims to a) define, in compliance with constitutional rules, the functions and prerogatives of the Lay Judges and, more generally, of the entire Italian honorary judiciary; b) formulate and support proposals aimed at strengthening its role, including through professional training.

As part of its action, the ANGDP in 2013 applied to the European Committee of Rights and Social Equalities; the European body in 2016 at the end of its investigation, stated that Italy did not respect the European Social Charter towards Lay judges, as it violated the "principle of non-discrimination".

Since 2014, the ANGDP has actively participated in technical and political ministerial meetings aimed at improving the status of the Lay and Honorary Magistracy; has organized conferences aimed at raising awareness among institutions, the legal profession, the judiciary and public opinion on the importance of the honorary judiciary and on the inexistence of protections and work guarantees provided by the Italian Constitution and by European Union law, despite almost completely fulfilling the function civil and criminal jurisdiction of the first judgment instance.

In 2012, the ANGDP signed the European Charter for Lay Judges and established a Study Centre that is responsible for organizing national and international conferences, as well as developing regulatory projects aimed at improving the judicial system.

The ANGDP is part, in addition to being one of the founders, of ENALJ (European Network Lay of Judges); one of its representatives covered the office of President in the period 2017-2020.

The ANGDP will support WP2, WP3 and WP4 activities. Specifically, ANGDP will handle:

FB European Consulting s.r.l. (FBEC) is committed to foster the dissemination of opportunities represented by European development programs and funds, for economic, social and territorial growth.

FB assists and supports private and public bodies in the development of project ideas in those sectors identified as priorities by EU, national and regional funds and programs. FBEC supports the implementation of project actions, in particularly in relation to project management and communication / dissemination of results, developing strategies and carrying out actions. In such framework, FBEC takes care of the management of institutional communication, with stakeholders and media, and realizes online and offline campaigns. FB, moreover, has a long experience in training field as corporate partner of several university and non-university formative programs.

FB will lead WP5 and will handle:

The European Network of Associations of Lay Judges was founded in Berlin (Germany) in 2012 as a non-profit association, bringing together national associations of lay and honorary judges. The main aim of the association is to safeguard and to strengthen the participation of citizens in jurisdiction as „a fundamental principle in any democratic society" (European Charter) independent from the different systems of judiciary. The association currently encompasses 20 associations from 14 European Countries.

(2) Promotion of the system of the democratic state

(3) Promotion of education and training

The promotion of education as well as general and vocational training with regard to public involvement in the administration of justice shall be realised through additional training for lay judges. Such additional training can take the form of, amongst other things, online seminars, conferences, training programmes, networking events, the exchange of proven methods and opportunities to sit in on lectures/seminars.

(4) Promotion of academic study and investigation

The promotion of academic study and investigation in the area of public involvement in the administration of justice is to be realised through own research activities.

The objectives of the Association are co-operation between members on the following: 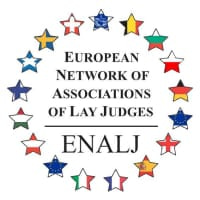